Parte 2 - An Aussie in Europe

Paris is known throughout the world to be one of the most beautiful cities with its undeniable charm and impressively detailed buildings. The fairy tale tree-lined avenues and parks, bistros and cafes, are a spectacular back drop for emerging talent and fashionistas to contrast against. An hour and half flight from Milan and I landed in the epicenter of the fashion world, Paris. 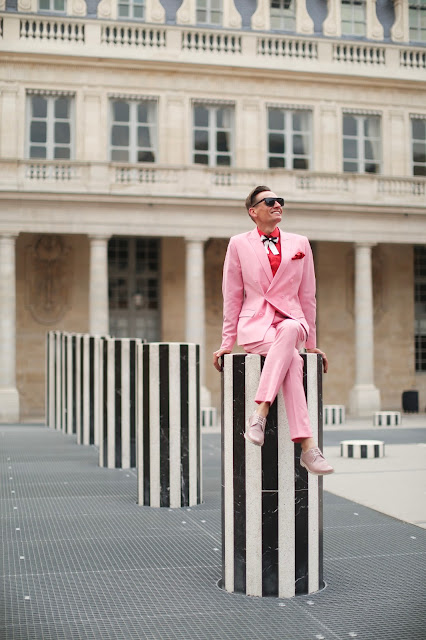 It wasn't long until I spotted my first blogger having their photoshoot  on a well known Paris corner. Fashion is everywhere in Paris and you can see why it is the fashion capital of the world and why It is instagram worthy. The city exhales chic style and it flows through the city just like the water in the Seine.

On the streets heading to my first show at Hotel D’Evreux for the Fashion Week Studio presentation, I had my first taste of the Parisian street style. The below zero temperatures influenced lots of layering and statement outerwear, with a focus on coats that resembled doona covers and plenty of lens grabbing furry textiles.

The designer presentations held by Fashion Week Studio were a throwback to the more intimate elegant showroom presentations of yesteryear with elegant gold chairs, high ceilings and romantic decor in the picturesque historical plaza. A true Parisian fantasy of allowing the audience to be up close with the designs and study them in a personal setting. The designer showcase suited perfectly to the location and I must commend the organisers for creating a fantastic program that really did compliment each designer.

Nathanaelle Couture, an Italian fashion designer born in Belgium but based out of Los Angeles displayed an elegant and glamourous collection worthy of any red carpet with flowing hemlines and delicate embellishments. One of my favourites was a full length long sleeve pink number with high neckline. Pure talent. Her ability to work with delicate fabrics in to create such feminine silhouettes is a true skill that will surely have women beating on her door. 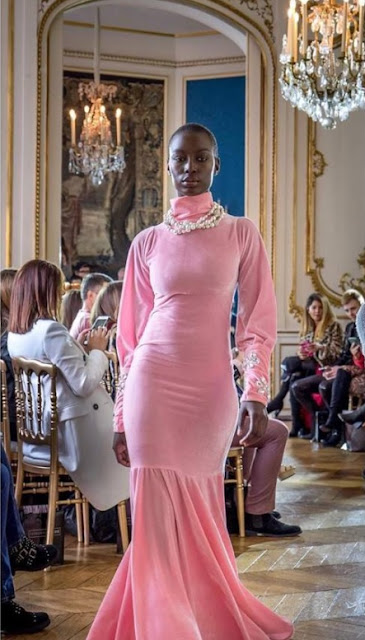 Miriam Budet was another notable standout with her ability her ability to combine colors, prints and textures that attract the eye. She definitely is a designer after my own heart with her unapologetic bold style that is so pleasing and refreshing to this Aussie's eye.

Tuileries gardens was energetic setting for Premiere Classe and Paris Sur Mode trade shows that showcases high-quality and high-end jewelry, footwear, leather goods and many accessory designers (you can never have enough accessories) and labels that are chosen for their originality and creativity. Noteworthy was Trisha Paterson who produces limited edition dresses (who wants something that a thousand other people have?). Trisha designs her creations in Paris and uses the finest materials whilst having the Italian eye for quality craftsmanship which creates a unique blend between the Italian and Parisian fashion cultures resulting in fabulous exclusive designs. 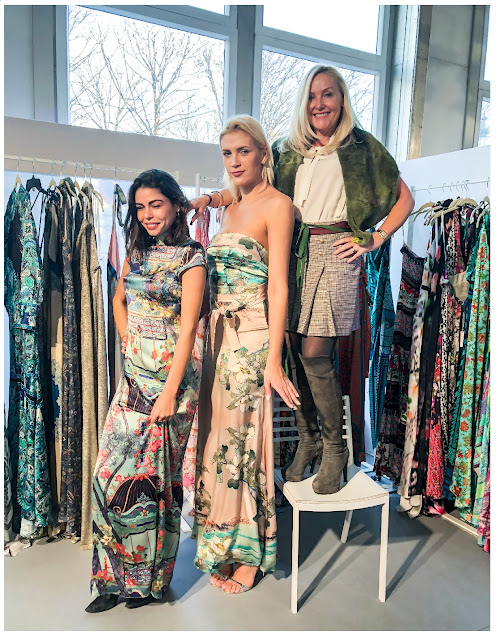 Trisha and her models

Oxford Fashion Studio was presenting collections by independent designers at Le Grand Hotel Paris. The standout from this show, besides the beautiful room was Esha Sethi Thirani whose collection was outstanding in design concept, theatrical appearance and quality. Its female power driven ensembles with masucline and feminine details was pure art and fantasy yet totally wearable. Round of applause for this highly sophisticated collection. Yasmeen Jiaw deserves a notable mention for her feminine display that I could see on many a woman. Especially her lovely pieces involving capes! Equally Marisa P Clark displayed a mature collection that would fetch well with the late 20's to early 40's crowd with a mix of fashionable suits and flirty individual pieces in wonderful colours. Oxford Fashion Studio should be commended for their event planning and sharing the creative designers with the fashion pack not only in Paris but all over the globe. What a fantastic initiative to support emerging talent. 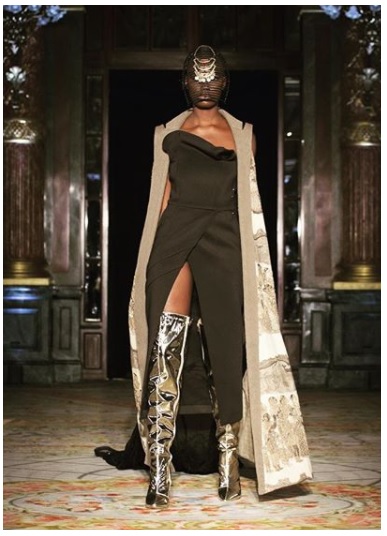 Venturing back to Tuileries gardens to the captivating Paris sur mode trade show. I do adore a runway but there is something to be said meeting with designers and representatives from brands who will take the time to speak with you. A fine example was a lovely artisan, Krasnova Modiste who creates amazingly chic beautiful hats all crafted by hand who works at her own atelier in Paris making bespoke millinery. Her graceful style is a throwback to the glamour of early Hollywood with statement accessories that wow and thrill. 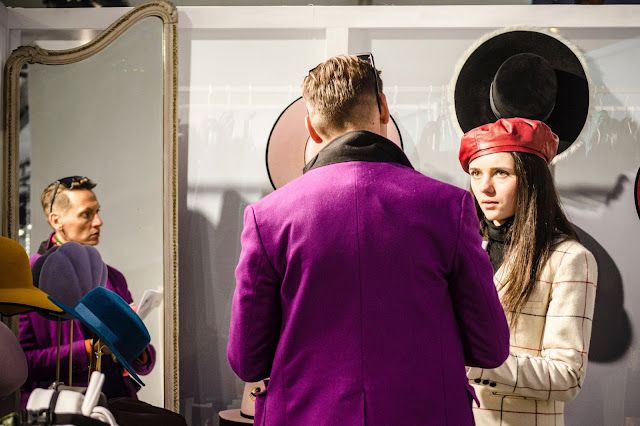 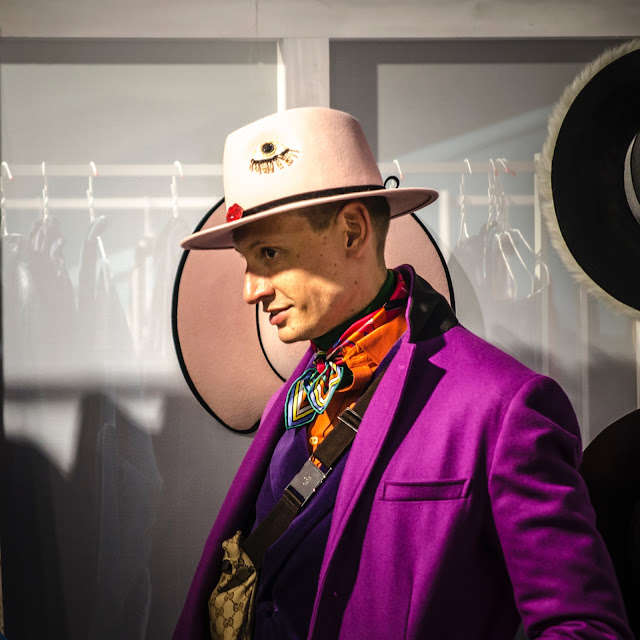 
The streets are filled with photographers trying to capture the street style. Both on duty and off duty around well known Paris monuments. The number of photographers who jump out from behind a barrier whilst you are shopping, leaving a cafe or lighting a cigarette is quite humorous. Always be camera ready when you are in Paris and be prepared to say Bonjour to a telescopic lens.

Treading the pavement from show to show you did see mainstream "influencers" in attendance who are clearly paid to attend and wear their sponsored clothing. I have to admit I was more enthralled with the individuals who showcased their own personal style and by the time the week was up, I was considerably bored of seeing the same "influencers" mainly due the repetitive same look. I really do hope there is a shift from "influencers" to people who inspire with their diversity and style as there is plenty of inspiration on the street. The street style scene is morphing into gimmicks with twins, triplets and matchy matchy couples.


Most people think of French style as stripes, wearing a beret, oversized sunglasses, red lipstick, overalls and looking like a mime. This is the cliché and one that is rarely seen on the streets.

Breaking down the wardrobe rules of the French was considerably easier than the Italian counterparts. They have non! Everything they do is chic, if it is going to the laundromat, out for dinner, to a fashion show or riding the metro to go to work. These women and men radiate in their clothing. Dressing well is about feeling good in what they are wearing.

Like the Italians, they do not focus on tacky trends, they set them. A key difference I noticed between the two styles is whilst the Italians flaunt their figures, the French flatter. Either way, I appreciate that both styles empower and make the wearer feel good.

What else makes you feel good in Paris? The shopping!!! Stay tuned for parte 3

DROP ME A LINE